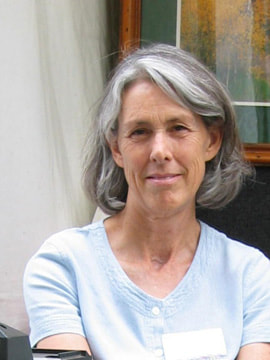 I spent many hours as a child poring over fairy tales books and copying the illustrations.  And having grown up in a large family with no room for clutter, I came to appreciate things that were both functional and beautiful. My studio is in the middle of my organic garden.  Between gardening and working with clay, it seems like my hands are never clean!

The process I use is called majolica.  It was developed originally in the Middle East during the medieval period but gained its greatest popularity during the Renaissance in Europe.  The process is basically hand coloring the raw glaze on the piece before firing, during which the glaze changes from a fragile powdery coating to glass.  Since the glaze doesn't move during firing, designs applied to it remain intact, making it possible to execute rather elaborate artwork... paintings on clay.


Before ceramics, I spent twenty-five years in fine art and graphic art, including ten years as a sign painter. My work has won several awards, is in galleries across the country, and has been exhibited in national shows.  In 2001, I won the award for Best Functional Pottery at the Foothills Art Center Colorado Clay show.